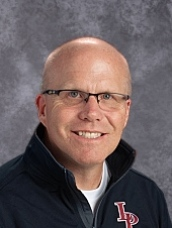 Scott Birrell earned his undergraduate degree from Brigham Young University, majoring in History with minors in English and Political Science.  From there he attended Claremont Graduate University in southern California where he focused on American Studies for his graduate degrees.  From 1994 to 2010 he worked as an adjunct faculty member at Brigham Young University, and from 2010 to the present as an adjunct faculty at Utah Valley University.  In addition, since 1999 to the present he has worked at Lone Peak High School in Highland, Utah.

He teaches AP U.S. and American Studies (combined 10th grade US History Honors and English Honors).  In 2001 he began participating in the annual AP reading where he has served as a Reader, Table Leader, Question Leader, and is currently the Assistant Chief Reader.  In these capacities he also functioned as an early arrival to the Readings in order to help establish the scoring guidelines for the Reading (along with many others), as well as selecting and assembling sample packets for the training of the Readers.

Thank you to all the participants of the Oregon APSI, both teachers and workshop attendees. We are happy to have been able to hold these workshops in spite of the uncertainty of 2021. We look forward to returning next year and building on this foundation.